In 30 years of practice as a plastic surgeon, I have not had even half a dozen patients return to me with the type of non-specific, multi-system complaints often attributed to what is being called “breast implant illness” or BII. Is BII real? I don’t know and neither, it appears, does anyone else. Are there women out there with poorly understood, unexplained disorders who have breast implants? Of course. There are also millions of women with these same disorders who have never been in the same room with a breast implant. Among the many things you learn after a few years of practice is that, in the world of medicine, anyone can react badly to anything. It can be a drug, metal, latex, gluten, or any other of the countless things we are exposed to in some manner and, yes, I would include breast implants. Why should implants be any different? It is another thing to claim, however, as some are doing, that implants are inherently dangerous, toxic devices that will make everyone who has them sick eventually. This flies in the face of reason and decades of experience with implants.

I had a very interesting patient return to me recently. Bea (not her real name) came to me in 2008 seeking breast enhancement. Her breasts were sadly deflated and sagging after having children. The areolae were stretched out. I suggested a breast lift followed by placing implants at a second procedure and she went ahead. Her result was great and both of us were very pleased. Over the subsequent years, I saw her for a couple of minor procedures, with the last aournd 5 years ago. She remained completely pleased with her breasts.

2 years ago, now 6 years after her implant surgery, she returned because she was concerned that the implants might be making her sick. She described a period covering 3 years in which she experienced hair loss, poor short term memory, aching joints, ringing in her ears, blurred vision, and decreased energy. She had been to see a quack in Orlando who diagnosed her with toxic mold in her blood and brain based on urine sent to a lab in Texas. I verified that the lab is run by a doctor who lost his license in California for terrible performance as a pathologist and now ran a lab in Texas that basically found mold in every sample sent. The quack Bea went to prescribed a series of totally worthless IV treatments with vitamin C, silver, and other nostrums, none of which did any good, and for which he charged over $50,000. Yes, you read that right. She finally came to me desperate to learn if her implants might be the cause because of things she read on the internet.

When I examined her, she looked to be in perfect health. Her breast exam revealed lovely, soft breasts that still looked wonderful, were soft, and non-tender after 8 years. I explained that there was no way to prove or disprove that her implants were to blame other than to remove them. She loved her look so much that she deliberated for nearly a year and a half before deciding to let me remove the implants. I told her that I would do this only if I could check her implants and the scar around her implants carefully. She readily agreed.

I performed her explantation with “enbloc capsulectomies” (total removal of all the scar around the implants). This was not easy to do because the scar was so thin and filmy, which is one reason her breasts looked and felt so natural. Much is made of “enbloc” removal of the capsule with no data that this makes a difference in outcomes. I did this so no one could argue that, if Bea did not get better, it was because I performed an inadequate procedure. Her implants (pictured) looked the same as the day I put them in. I cultured the capsule tissue and sent it to pathology for examination. All cultures were negative and the scar was just that, scar. (Photo: the implants look like they just came out of the box. Her capsules look red because they are stained with blood. Otherwise, they would be clear) 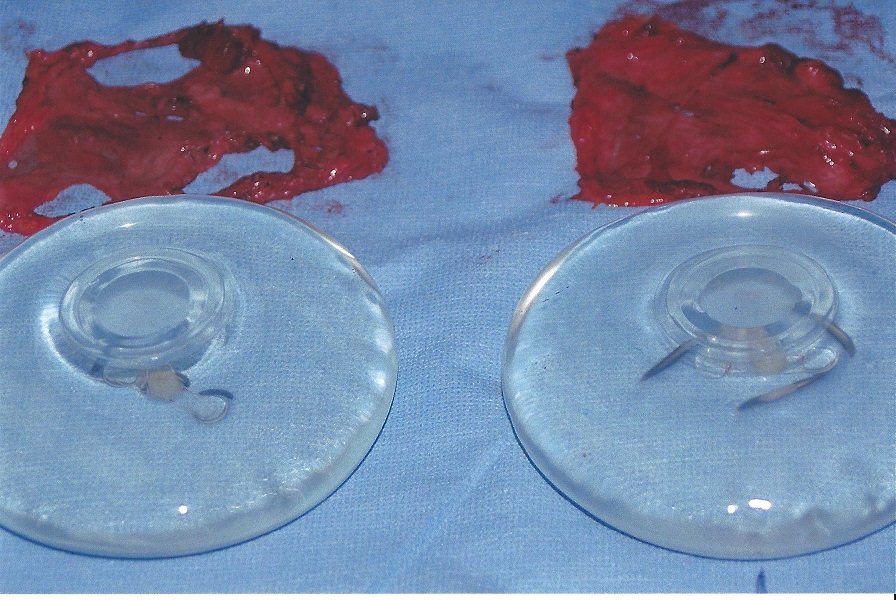 After surgery, Bea’s breasts looked a little deflated but, in truth, still better than when she first came to see me because of the persistent benefit of the lift. She was OK with them. Now, for the question everyone wants answered: did she feel better?

8 months later, I saw her and asked how she was doing. Her first observation was that she did not have to take naps in the afternoon any longer. She felt that her energy was returning. Her memory was better, ringing in the ears gone, joint aches nearly gone. Her hair loss, however, continued unchanged. I asked if she was glad she had the implants removed and she said she had no regrets.

So, was this BII? Some would say so. After all, the implants came out and she got better. Case closed, right? Not necessarily. This is just one patient. Many patients have reported having their implants removed and did not get better. We know that the placebo effect (belief in the treatment) can make even proven worthless treatments work as much as 20-30% of the time.

In Bea’s case, she was not a militant anti-implant zealot; she was not “bat-shit crazy” as some have claimed of women who allege they have BII. She was really feeling poorly and with no explanation. No unusual stress, no family strife, no unusual exposures that she knew of. She just wanted something to explain why she felt so badly. Mainly, she wanted to feel better.

I cannot say Bea had BII. As I have stated repeatedly, I do not believe implants are toxic or dangerous. I have also stated, repeatedly, that I believe there is a small population of women who probably do not tolerate implants for one reason or another. It may be an allergic phenomenon or some unusual immune response. We know people can be exposed to something for years before they develop a sensitivity to it and this may be the case with implants. I think the truth about breast implants will ultimately be found somewhere between the claims of those who say no one can get sick from them and those who claim everyone who gets them will become sick.

For my part, I am just glad that Bea feels better and is happy with her breasts.