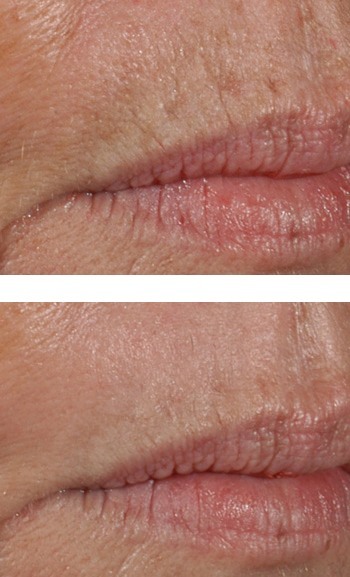 Fractional ablative skin resurfacing is a single-treatment procedure where a powerful laser creates tiny, microscopic columns in damaged and unsightly areas of your skin. The healthy skin surrounding the columns helps the columns to heal, often within 2-4 days.

The result from this treatment is noticeably tighter skin, less pigment, and a visible improvement on your skin's appearance. Our advanced skin resurfacing triggers a deep healing process that replaces treated areas with fresh, glowing skin.

Our Palomar Lux2940™ fractional ablative laser handpiece directs thermal energy into the skin via hundreds of tiny microbeams. Unsightly skin is selectively vaporized, and within a few days is replaced with fresh, healthy skin - generated by the body's lymphatic system.

What makes this fractional ablative skin resurfacing differently from other ablative methods?

Some ablative skin resurfacing methods remove a major portion of the skin's surface. While good results are eventually seen, the drawbacks including prolonged red and raw skin, longer downtime periods and a higher risk of infection.

Are these treatments painful? What should I expect after treatment?

You may expect redness, warmth, swelling or tightness in the treated area, with a range in downtime of 2-4 days. During this period, your skin is healing and regenerating. You are advised to stay out of the sun, avoid scrubbing and not wear makeup after treatment.

For several weeks after treatment, depending on the type of treatment and areas treated, your skin may appear pinkish in tone, which is normal. Makeup can be applied typically after 4 days, reducing this temporary tone irregularity.

Unlike other skin rejuvenation treatments, our fractional ablative skin resurfacing treatment is a single day procedure.

Fall into FABULOUS with our Botox and Filler Specials!